Today – In 2020, Derwent and Hope Woodlands Parish Council (DHWPC) in consultation with Derbyshire County Council (DCC) Highways, removed 30 tons of road spoil (tarmac, limestone chippings, concrete) from the island and replaced it with 30 tons of good quality top soil. Following consultation with DCC and departments of Ecology, Landscaping and Highways at the Peak District National Park Authority (PDNPA), the island was fenced to inhibit grazing animals and planted with 3 species and 17 varieties of heather which should provide flowers for most of the year. 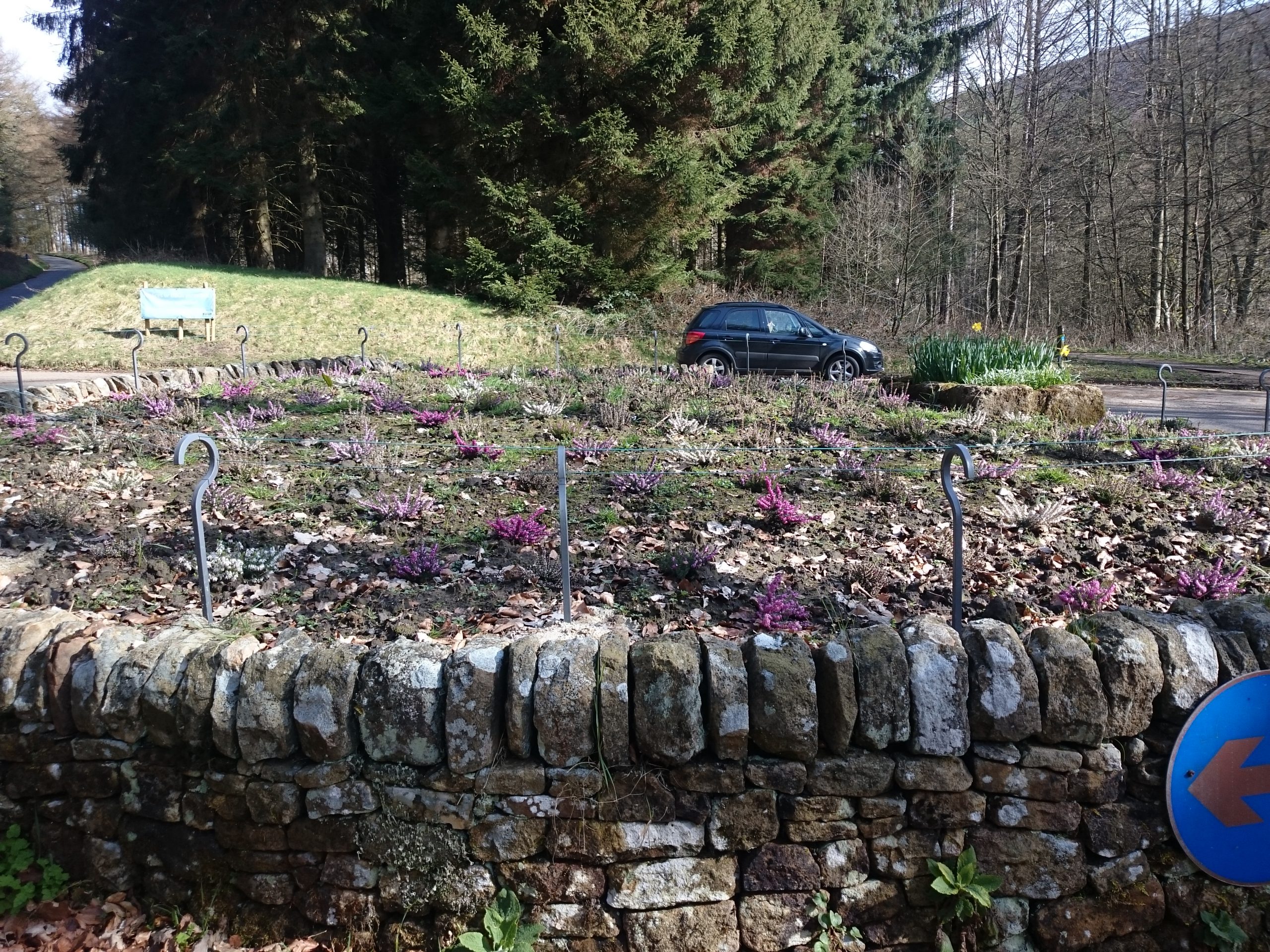 The parishes of Derwent and Hope Woodlands only have around 70 adults and the total cost of the work was £2043. Therefore, DHWPC is indebted to the Tesco “Bags of Help” scheme which provided a grant of £2000 and made this project possible.

Peak District National Park (PDNP) – Derwent and Hope Woodlands are joint parishes in the PDNP mostly just north of the A57 Snake Pass road. The PDNP is divided into 2 areas; the “White Peak” to the south on calcium-rich limestone and the “Dark Peak” to the north. The latter, which is where the joint parishes are situated, is typically acidic moorland over sandstone and gritstone.

Fairholmes – Within the parish of Derwent is the Fairholmes Visitor Centre managed by the PDNPA on land owned by Severn Trent Water. The area is generally quoted as having 500,000 – 2,000,000 visitors per annum.

History – By 1980, a small traffic island was in existence at Fairholmes around which vehicles would pass to access the visitor centre car park or return back down the valley (Derwent Road is a no-through road). Several years later and following the introduction of single-operator buses with national concerns regarding the reversing of the vehicles particularly with passengers onboard, the current island was created following the erection of a low wall. A single attempt was made to introduce pot-grown heather but the plants soon perished. The only other activity on the island appears to have been when extensive weeds on the roundabout were strimmed on 2 occasions.

Cultivation Licence – In 2013, Derwent and Hope Woodlands Parish Council (DHWPC) applied for and were granted a licence by Derbyshire County Council (DCC) Highways. Considering that the island had never been cultivated and had suffered at least 3 decades of neglect, DHWPC found a wilderness of invasive weeds that had been allowed to flourish unchecked. Amongst them were couch grass, convolvulus and nettles all of which spread partly by roots/runners such that the smallest fragment left after cultivation would reinfest the ground. Also present were docks, thistles, coltsfoot and willowherb. Inevitably, DCC imposed covenants with the Cultivation Licence including prohibition of herbicides. Since the licence was granted, members of DHWPC have repeatedly weeded the island. Whereas informal advice was given that DHWPC should remove visible weeds and leave the soil fallow for a year until the ground was plant free, members felt that some constructive effort should be made and in 2014 and 2015 wild flower seed mixes were scattered on the island with mixed success. The weeds, particularly couch grass, reappeared and the wildflower seeds germinated late and were then killed early by frost. 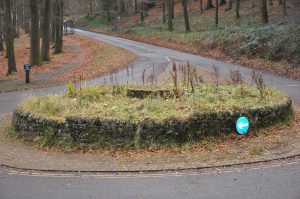 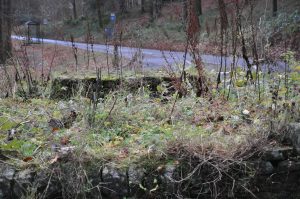 DHWPC has learned a great deal in respect of growing plants on the island:

The atmosphere – The island is in a relatively deep valley off the Snake Pass. Deep valleys at this altitude are cold traps. This is compounded by its position between 2 large deep, cold bodies of water (Ladybower and Derwent Reservoirs). Furthermore, the valley runs generally north-south and the island is on the west side of the valley. The east side of the valley is much warmer because it receives sunlight when it is strongest in the afternoon. In winter, frost and snow remain on the east side of the valley long after those on the east side have disappeared. Whereas the island has no overhanging branches, it is surrounded by very tall deciduous trees. In winter, the island receives sunlight for short periods but none whatsoever after tree buds open and the leaves appear. Consequently, the soil warms up much more slowly than the surrounding area which is in itself much colder than nearby villages such as Bamford. The slow warming of the ground results in a late start to the growing season and one cut short by early frosts.

The soil – When members of DHWPC started to cultivate it in late 2013, it immediately became apparent that good quality topsoil had not been employed. On digging, various materials were discovered including limestone chippings, tarmacadam, concrete, a very large section of concrete drainage pipe and other building materials. Presumably, it had been used to dispose of surplus waste from road/track refurbishment. The soil contained virtually no organic matter. The poor soil and presence of limestone chippings explains the failure of the one attempt to grow heather (a calcifuge). 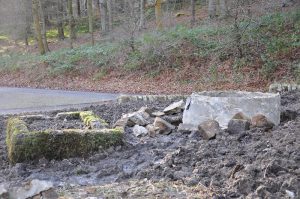 Herbivores – The area is home to a large variety of herbiverous animals. Woodmice and voles eat new shoots in the spring and seeds in the autumn so reducing natural regeneration of plants introduced by DHWPC. Rabbits, hares, sheep and more recently, deer sometimes make their way down to the bottom of the valley and thus the roundabout where there is both water and herbage (the adjacent woods being devoid of grass). A single animal is able to clear the plants overnight.

Road Safety – In terms of traffic safety, the maintenance of clear lines of visibility is essential. Therefore, DCC Highways has forbidden the use of an enclosing fence unless visibility is maintained. In addition, shrubs and trees are deemed unsuitable. Structuring the roundabout with raised beds and/or taller plants is also being avoided so as not to present a danger to traffic, cyclists etc. by impeding vision. Consequently, relatively small plants at a low density have been employed. To 2019, DHWPC was making efforts to grow suitable indigenous plants. However, as member’s gardens are local, they suffer similar problems with low temperatures as the traffic island so progress was slow and limited.